Find the flexwork
that fits your life
at every age & stage
◄ Back to main
5 Tips if You Want a Professional Job, Not A High-Flying Career ►
Flexwork Creates Working Mother Role Models Across Two Generations | April 16th, 2018 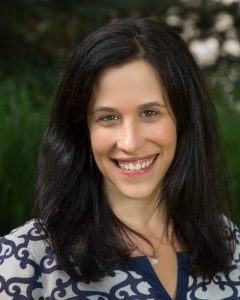 Tamra Feldman never had to wonder if it was possible to successfully blend work and family. Her mother had both part-time and full-time jobs as a C.P.A. while she was growing up, and she taught Tamra that work is an important part of a woman’s life.

Following her mother’s example, Tamra built an impressive resume of consumer insights work at Gap/Banana Republic and then marketing expertise in a VP-level role for Shop It To Me. Once Tamra started a family she briefly flirted with the idea of staying home, but she soon acknowledged that working was too much a part of her DNA. Instead she started thinking about morphing her career into more family-friendly options that would allow her to still make a significant contribution to her household income.

Though Tamra’s work had always been in-the-office roles, when her family moved from San Francisco to New York City, she tried out a less traditional work structure. For the last three years of her Shop It To Me stint she worked remotely, managing five people in the company’s California headquarters. She attended meetings by videochat and didn’t miss a beat.

As her family grew, her passion for independent work flourished, too. Managing a team on bi-coastal hours was a bit of a logistical challenge, so she decided to go solo with her own marketing consultancy. By now she knew that she did not have to be in an employer’s office to make a valuable contribution, manage people or play a significant role. To establish her consultancy she began by reconnecting with former colleagues to learn about their business challenges and get a feel for the kind of marketing projects that were being outsourced at the time. Every networking meeting resulted in more connections and many referrals—and through a combination of luck and hustle she started building a client base of women’s lifestyle brands.

Two years into her entrepreneurial venture that included work for Time Inc., Spafinder Wellness 365, Styleshack and Gap, Tamra took on a client where she now devotes roughly 50% of her time. She was introduced to this small, Brooklyn, New York-based innovation studio, Inamoto & Co., by Prokanga (a boutique recruiting firm that matches talented women with non-traditional work). Inamoto’s founders believe strongly in the benefits of flexwork and draw remote talent from many geographic locations.

Today with three sons, ages 5, 3 and 8 months, Tamra is a Strategist at I&Co focused largely on growth opportunity, digital innovation, and direct-to-consumer evolution initiatives for retail and automotive clients. She intentionally seeks out roles that do not require a commute so she has more time with her children in the early morning and evenings. She considers it a luxury to work from her home office in New Jersey where she can see her children for quick soundbytes about their school days. She travels to Brooklyn for the occasional meeting and logs lots of time in videochat meetings. Her typical week also includes project work for other clients (consumer research and product management for website/app launches), a long list of family errands, school volunteering and enjoying time with her boys during afternoon trips to local playgrounds, the library, and other area classes and events.

Since 2013, Tamra’s ability to fit work into her life has paid off. Compensation from an impressive roster of clients has generated income that is comparable to her previous full-time jobs. She considers herself ambitious and has a careful eye on her bottom line, always setting revenue goals a little higher than the year before. Compensation is secondary, however, to high-quality work, challenging projects and the ability to learn new skills. With this trifecta—and plenty of time with her family—she does not feel a burning need to build a multi-million dollar agency or restart the climb to the corporate C-suite.

With small children, though, the reality is that freedom to work comes at a cost. A nanny comes to her home four days a week (for a total of 30 hours), and Tamra always reserves Fridays as “Mommy day”. Most of her work can be done during these 30 hours (and preferably while her two older children are in pre-school) so she can spend time with them in the late afternoons. If necessary, she works extra hours at night or on the weekends. When she needs an extra pair of hands she enlists the help of local seventh and eighth grade girls.

Tamra’s childcare bill takes a big chunk out of her monthly earnings, but she feels strongly that it still makes sense for her to work. She doesn’t want a gap in her resume, and she knows that her heaviest childcare spend is during these few years before all her children are in school. For now she sees childcare as an investment in personal and professional fulfillment and the ability to continually build a portfolio of expertise.

“I know that with flexibility I can work and be a good Mom. I had tremendous respect for my mother’s ability to blend work and life, and I want to be a similar role model—showing my boys that women can be present, nurturing Moms and support their families, too.”

Wondering how to create your own flexible work structure? Read other case studies and many more 9 Lives for Women blog posts on flexwork now.

Check out my book, Ambition Redefined: Why the Corner Office Doesn’t Work for Every Woman & What to Do Instead and order here.

Share A Job and Get A Life
Read more ►