Find the flexwork
that fits your life
at every age & stage
◄ Back to main
Embrace Your Mosaic ►
Signature Work Style | September 25th, 2012 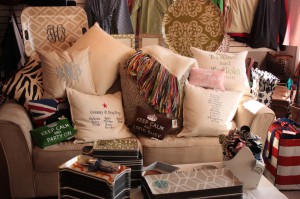 Maybe you’re waffling about a return to work because you think you have to completely give up your freedom and work for an inflexible boss.  That’s only one possible scenario:  don’t forget the option of working for your flexible self.

The entrepreneurial path isn’t for everyone—but those who can roll up their sleeves for tasks A to Z can comfortably combine work and family.  That’s what   returning professionals Ann Nash and Mary Logan of Wilton, Connecticut did after many years out of the workforce.  Ann was out for 7 years, and Mary a much longer 19—but both were busy mothers of three and active volunteers.  In 2010 they launched Signature Style, a personalized home décor, apparel and gift shop based in their hometown.

How did the business partnership begin?  The two women became friends while chairing a major volunteer initiative called Class Project 2012.  This particular organization was in the red, but Ann and Mary turned it around in just six months.  Much of their focus involved fundraising for their children’s class—paving the way for a major all night post-graduation party for 350 kids.

Ann and Mary say that this project gave them the confidence that they could tackle any complex challenge and reach a positive outcome. Their new strategy was to raise money through less expensive events—and in the process they honed a lot of business skills they need today…like project management, budgeting, public speaking, writing, social media, advertising, promotion, team management, web site development and more.

Ann enjoyed her volunteer work, but was itching to go back to work.  She had a 10-year foray into residential real estate, but wasn’t sure that was her calling.  (Mary, meanwhile, was not yet thinking about work—still consumed by triplets at home.)  Then came a random act of kismet:  one of Ann’s college friends took her to a store in MIchigan (a successful, high end monogramming shop), and said that Ann should put her abandoned art major to work by opening a similar store.

“What do you have to lose?” was the question that Ann’s risk-friendly sister asked when Ann actually started researching this entrepreneurial idea.  Before too long Ann showed up in Mary’s driveway with a car full of embroidered product samples and a mind full of creative business ideas.

Mary was open to the idea of opening a shop knowing that her triplets were nearing the end of high school.  But she had worked only at a Wall Street law firm, did not consider herself a businesswoman , and worried a bit about her limited computer skills.  Ann was the more business-minded of the two, and a post-college foray into the software industry taught her basic accounting and sales.

Soon the two women realized they didn’t need to be experts in all aspects of running a business.  They knew that in challenging volunteer projects they always had to learn new skills—like the time Ann’s son helped her create a basic web site.  And as they took the first steps toward their business, they learned that the key to a good business partnership is complementary skills.  Ann has been the computer guru and creator of product personalization, and Mary takes on more of a day-to-day operating role, handling bookkeeping and inventory control.  The two share buying responsibilities and they have both learned ALL aspects of the business so they can jump in wherever there’s a need.

Within three months the self-funded Signature Style was up and running, and the store is now a popular “go to” gift source.  Ann and Mary personalize and sell brightly patterned (safe to say, “preppy”) trays, cups, belts, sweaters, pillows, napkins—and many more items they find during frequent gift show visits.  The store turned a profit after six months, but the owners are conservative about reinvesting most earnings into the business.  Steady growth gives them the confidence to minimize their own paychecks for a while:  sales have doubled in one year and last month they had 14,000 web site hits. Next up is a soon-to-launch revamped mail order site that will increase their sales of about 100 key products nationwide.

Though both women are working long hours, Signature Style is their own baby and they report only to each other.  This work structure (and three employees!) gives them the freedom to do what they need to do with their families and run their business at the same time.  Mary just went through the process of getting not one, but three children into and off to college, and Ann still runs command central for three children–ages 13, 16 and 18.

No one would ever say that Ann or Mary have skipped a motherhood beat, but the two have learned that there are benefits in creating opportunities for your children—and yourself.  As Ann says honestly,

“All I ever wanted to be is a Mom—and I’ll always love that role—but with this business I feel like myself again…and I’ve never felt more alive.”  —KAS

Go to Your Room with Jane Fonda
Read more ►

Glue that Book Dream to Your Heart
Read more ► 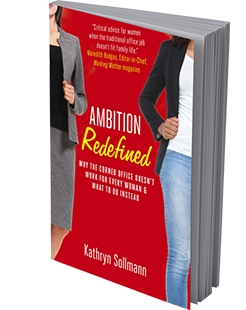