Find the flexwork
that fits your life
at every age & stage
◄ Back to main
The Missing Link ►
Three Rooms at the Inn | October 23rd, 2012 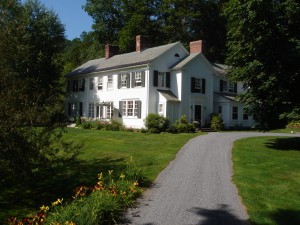 When one half of a couple is contemplating retirement, reinvention can be the result for both husband and wife. That was the case with Gay and Roger Squire, now owners of Squire House, an upscale B&B in Dorset, Vermont.

Gay raised two sons and had a brief stint as a social worker. Roger had a senior post at Citibank. Gay says Roger was ready to retire decades before age 65—but he kept up the corporate grind until 57. Both knew they wanted to leave the New York City suburbs and do something completely different. And Roger wanted to trade his corporate affiliation for a business partnership with his wife.

At the top of the couple’s reinvention list was the idea of a bed and breakfast. Many soon-to-be retirees toy with this idea, but Gay and Roger were advised to think carefully before jumping in. Experts in the hospitality field point out that a knack for entertaining is only one of many skills needed to run a B&B.

So while Roger was running the last laps of his corporate career, the couple turned their Yorktown Heights, NY home into a small B&B. Their sons were away at school—leaving two bedrooms free for a trial run. For 10 years they had occasional guests—often business professionals linked to nearby IBM—and frequent thoughts about taking their home business to a full-time level and new locale.

As Roger neared his planned early retirement date, the Squires began to research and visit possible B&B sites. At first they were set on Montana—but then while visiting friends in Vermont, they changed their minds. Soon they discovered the three-season Manchester area and began looking for a residence that could double as a B&B.

The treasure the Squires found is a formal, 1918 country colonial on 11 beautiful acres in Dorset–a picturesque Vermont town. Roger jokes that they bought “a 1918 McMansion in great disrepair.” With good humor, a lot of patience and a strong vision, the couple looked beyond the neglected condition of the house and forged ahead with major renovations.

Structural renovations were completed in about nine months–in time for their first guests on a New Year’s weekend. At the end of the project they had consolidated bedrooms, added bathrooms and created an exceptionally lovely B&B that now has three large en-suite guest rooms, a paneled dining room, five wood-burning fireplaces, and three comfortable gathering rooms. There’s not a doily or collection of kitsch in sight—each room is very tastefully decorated with paintings, fine carpets and antiques.

With a home this lovely, one might wonder why the Squires aren’t worried about inviting strangers to sleep under their roof. Gay says that was exactly her mother’s thought when they first announced their new business idea. The fact is, though, that Gay and Roger look forward to meeting new people. At least 50% become repeat customers, and many are now personal friends.

That’s not surprising, since Gay and Roger are fun and charming, and I can tell you firsthand that Squire House is not the typical B&B.  As a guest at this B&B, you feel like you’ve received a special invitation to an architecturally interesting, well decorated, painstakingly manicured home and estate. People come from all over the world–often toting interesting stories about fascinating lives.

Gay’s breakfast alone is well worth the journey.  She likes to cook, so thinking up delicious breakfast ideas is not a chore. What was more challenging for the couple were the marketing tricks of the trade. Like many other businesses, it took about three years before their B&B had a steady stream of customers. Their early brochures and print ads became obsolete as an unfamiliar world of internet marketing emerged. Roger tells the story of serving breakfast one morning and hearing that each of the guests found out about Squire House through www.tripadvisor.com. At the time the Squires had never heard of Trip Advisor or its very favorable rating for their B&B.

In their 14 Squire House years, Roger and Gay have learned that hospitality experts are right: running a B&B requires much more than providing a hearty breakfast and guiding guests to local sights. To succeed and continually build their customer base, the two have become willing students of internet marketing. A full 80% of their business comes in via the internet, so they’re always looking for new ways to attract potential guests to their site. This makes for days that range from the esoteric to the mundane—as they look for search engine optimization or new recipes for pancakes and French toast.  –KAS

No Easy Street on the Admin Route
Read more ►

Jane’s Journey Back to Work: How to Network Your Foot in the Door
Read more ►